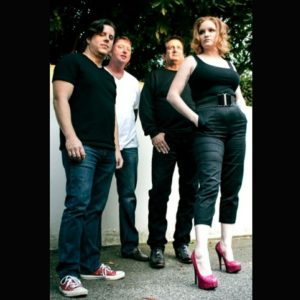 Somewhere between Pat Benatar and 90’s grunge/rock is where you will find Plastic Angels. Known for their power-house vocals, moody rock riffs, and provocative lyrics, Jeff Lawson & Bethany Pierce began writing together on Cape Cod, MA in 2013 under the moniker ‘Angry Ginger’. After nominations for local Limelight Music Awards such as “New Artist of the Year”, “Female Vocalist of the Year”, and “Live Act of the Year”, the pair never looked back.

Following a name change to ‘Plastic Angels’ they released an EP sarcastically titled, “Kings of the World” in 2016 in collaboration with Grammy-Nominated producer Joel Hamilton. They began promotional touring in New York, Massachusetts, and California. Their thought-provoking, sophomore release ‘Wake’ produced by Grammy-nominated Jon Evans in 2018 gained national and international attention with a showcase performance at the 2019 NAMM show and radio airplay throughout the US, Canada, and the UK. Newly signed to RL Recordings (Universal Music Group), Plastic Angels is slowly proving that they are a musical force to be reckoned with.