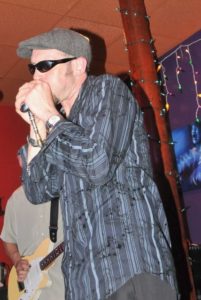 The Racky Thomas Band has been a torchbearer for the blues since its formation in 1995, when Racky Thomas collaborated with bassist Todd Carson, guitarist Nick Adams, and drummer Ted Larkin to make a demo CD and do some gigs around the Boston area. Thomas spent ’96 and early ’97 abroad before returning to Boston, with the intent of putting the band back together and taking another stab at cracking the blues scene.

After an invitation to enter Boston’s 1997 Battle of The Blues Bands and the addition of pianist Ron Poster, the band went on to win and traveled to Memphis to compete on a national level. After not making the finals in Memphis, the band traveled home, humbled, yet with a stronger resolve.

Following the departures of Larkin and Poster, the band, in various formations, forged ahead, releasing four critically acclaimed, independently produced CD’s, including their most recent effort: Hard Travelin’, and making numerous club and festival appearances, opening for such luminaries as Luther “Guitar” Jr. Johnson, Ronnie Earl, and Sue Tedeschi; and highlighted by a trip to France in 2010 to perform at the Terri Thouars festival.